Real-life Pirates of the Caribbean!

There’s no issues with pirates now, but the Bahamas were once the centre of the pirate world! 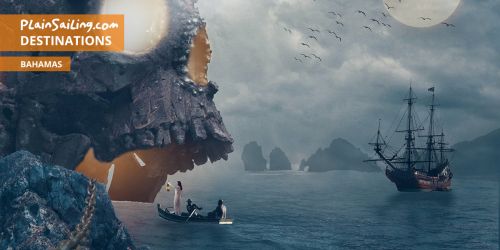 The Bahamas islands are paradise on earth, and even more so for sailing folk. Beautiful islands teeming with wildlife, reliable winds, a relaxed pace of life, and blissful sunshine all year long. Throw in its proximity to major shipping routes to Europe with ships carrying precious cargo; plenty of small bays, coves and natural harbours to hide out in; and easy access to copious amounts of rum; and you can see why Pirates chose to while away their time here!

The other key benefit of being based in the Bahamas was that the waters are reasonably shallow – so you could make a quick getaway from robbing a ship and nip into shallow waters, where the big navy and war ships were too heavy and too deep to follow.

Pirate Republic of the Bahamas

There was a time between 1690 and 1720 when the Bahamas was literally a Pirate Republic – it must have been a fun but frightening place to be around. There were around 400 inhabitants on the main New Providence Island (where the capital city of Nassau is), but over 1,000 Pirates, so they were even able to ‘vote’ one of their own to be installed as the Governor of the country – which makes it a bit easier to see how they got away with terrorising, capturing and looting all sorts of ships for their treasure.

Pirates of the Bahamas: Roll of Dishonour

All of the biggest and baddest of the Pirates were in the Bahamas at one point: the legendary Blackbeard, who captured over 100 ships in his time and once had a crew of over 300 people, had many parties on these shores. When he wasn’t busy pillaging American coastal cities, or ransacking big French or Spanish ships in the Atlantic, you’d find him at his base in Nassau, living the high life and generally cavorting. Such was his reputation that he often didn’t have to fire a single cannon - his targets just flew a white flag and gave him exactly what he wanted, in the hope that he would let them escape. And sometimes he did.

Calico Jack, another of the most famous pirates in folklore, also worked the islands with his self-designed flag: the Jolly Roger, with a skull and two cross-bones (which is now the international symbol for pirates!) He got his reputation after starting a mutiny against his own Pirate captain (Charles Vane) because Vane was choosing to run from a big French Man o’ War instead of turning to fight it. They ran from that battle, but when they reached dry land Calico Jack and the crew overthrew Vane, took his ship, and sailed off into the sunset without him.

Or Henry Morgan, of ‘Captain Morgan’ rum fame, who got bored of attacking ships and attacked the whole of Panama City until he had looted all its gold instead. Then there was bloodthirsty Black Roberts, who literally took no prisoners – choosing instead to execute anyone his ships came across. There’s still rumours that there is a real-life treasure map of his, which would be an intriguing find.

Calico Jack is joined in folklore by Anne Bonney and Mary Read, two female pirates who disguised themselves as men to serve as part of his loyal crew (yeah, I’m not sure how either, as prosthetic masks hadn’t been invented yet, and Bonney was also Calico Jack's lover?). They are famous for being the only women in a heavily male-oriented industry, but were apparently just as violent, aggressive and brutal as any man!

They used to say that whilst an honest man dreams of Heaven, a pirate dreams of the Bahamas.

Sailing in Paradise: no Pirates

Fortunately, there’s no pirates in the Bahamas any more – they were stamped out of these parts by a heavy-handed response from the Royal British Navy in the 1720’s after one too many ships went missing in action - but looking around the chart today and you’ll find some funky place names like Treasure Cay, Man o’ War Cay or Deadmans Cay which hint back to the illustrious history – and of course, the sun, sea, sand, rum and superb sailing conditions which convinced the pirates to make this their home in the first place are all still there.

Ready to sail in the Bahamas?

We can help you go sailing in the Bahamas on your own yacht or catamaran charter. Search in the pink box for yachts and catamarans in the Bahamas with live pricing and availability, or contact our award-winning Customer team through LiveChat, UK Freephone or email!