How much does it cost to spend the night in a marina in Croatia, Greece, Italy, France or Montenegro? We give you the lowdown! 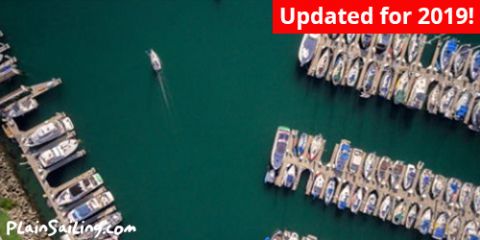 One of the things you’ll have to pay for during your charter is mooring or berthing fees – which are fees for staying in a marina or harbour overnight, and connecting to their electricity or using their water supplies, toilet facilities, ropes and pontoons.

The first and last nights of your stay will be at your home marina, so you won’t need to pay anything for these. Likewise, you can stay in anchorages for free (but you won’t have access to electricity) – (though be aware that they may charge you for a National Park pass if you overnight in one of a national marine parks - particularly in Croatia).

We also include some useful links for pre-booking your berth in the marinas online, which is a growing phenomenon - there is no real market leader at the moment, but things will improve in future years.  Often it is best to contact the marina directly to ask them how or if you can book.

Click for more about berthing or mooring fees in Croatia, Greece, Italy, France, or Montenegro 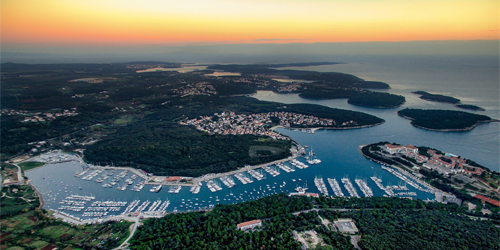 Since sail-tourism is still relatively new in Croatia, marinas are generally privately owned and reasonably modern.  ACI - who, with 22 marinas, operate the largest chain of marinas in the whole of the Mediterranean, and covering much of the Croatian coast – were once owned by the state, but have since been sold to privatise investors.

ACI's relative monopoly (and recent investment or development costs) means that they drive the pricing in the market though, and you’ll find that prices in Croatia are substantially higher than in Greece.

Mooring fees are charged by the night, and prices change depending on your location, the time of the season, and upon the length of your boat in metres (in the case of Catamarans, they also charge a supplement of up to 100% for the additional width of your boat).

The table below gives an idea of daily berthing prices for low and high season across the country.  NB: some figures have been converted to Euros, so these figures aren’t exact.  These are sample prices for 2019:

PRE-BOOKING A BERTH IN CROATIA

The Croatians are ahead of the game when it comes to pre-booking berths, and they better understand how marina-hoping sailing should work. However, most of their marinas are also pretty vast, so pre-booking isn’t essential (particularly outside of high season), and beware of booking too far in advance, as most pre-bookings have no cancellation policy, so you won’t get any refund if you can’t make it to the right marina.

Almost all marinas will allow you to pre-book a berth (to guarantee it is there for you at the end of the day) – many give the option to book online if you google their websites, including the ACI marinas website.

You can also use the new ‘My-Sea’ to book yourself a berth at any of the ACI marinas (or plenty of others in Croatia) from your smartphone browser or via their App – the prices seem to be about the same as if you go direct. ACI marinas are also listed on Marina Reservation, but they don’t seem to allow direct booking for any other marinas in Croatia yet. 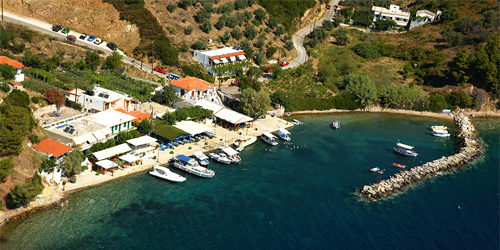 In Greece, yacht berthing or mooring fees range from €27 per night for a smaller yacht in low season, to €91 per night for a larger yacht in high season. Catamarans sometimes get charged an additional 50% on top of that, but it varies by marina.

Berthing in Greece is much different from Croatia because, being further from the mainland, sailing is much more a part of the normal way of life on the Greek islands, and because things have built up over the years.

Whereas the Croatians are seeking a return on their investment in developing the marinas over the recent years, the Greek infrastructure has been in place for many, many years, it serves locals as well as tourists, and they place greater value on the benefits to the local economy that a yacht in the marina can bring (with likely spending at the local shops, tavernas and bars) – consequently, the amount you’re charged for a berth with electricity and water can vary from free to about €30.

At the moment, whilst the Greek islands do have internet, there isn’t a great deal of information out there about marinas, what they offer, and how much they cost. Many of them – particularly the ones on the islands - are either free or there is a token charge of €10-15 a night. Of the larger marinas, only the following have published prices for 2019:

PRE-BOOKING A BERTH IN GREECE

The prevailing wisdom at the moment seems to be that people have been sailing in Greece for centuries and that they never needed to pre-book then, so you don’t need to pre-book now. Consequently, the Greeks don’t go out of their way to make it easy to pre-book a berth. Countering that, though, they will always try to find a space for you in their marina - even if it means tying onto another yacht - so pre-booking isn’t always necessary.

If you can find a number to call, it’s probably best to phone the marina direct to try to pre-book, or, if you want to gamble on being able to get to the right marina at the right time, you can use Marine Reservation, and they will call the marina on your behalf (be aware that berths are non-cancellable, so you won’t get a refund if you don’t make it to the marina). 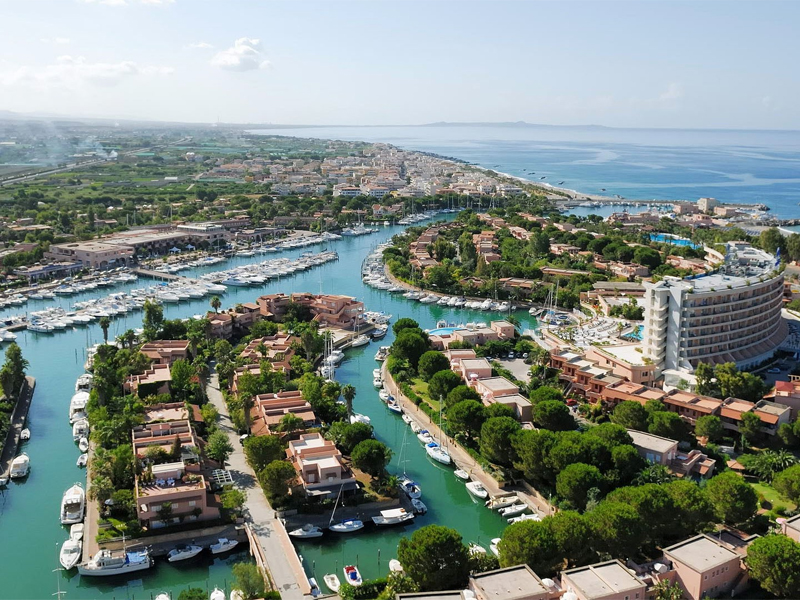 Italy has been undergoing something of a renaissance over recent years, and many of the marinas here have been evolved into grand coastal developments, boasting all the latest mod cons – including baby-sitting services, courtesy hire-cars, swimming pools and tennis courts – as well as myriad stunning marina-side apartments, with shops and leisure facilities open all year round for their wealthy owners.

As a result of all this investment, whilst the marinas are certainly much nicer places to stay, they’re also on the expensive side of the market. Of course, you would expect key marinas around the Amalfi coast, Capri and Ischia to be expensive, but even the smaller marinas on distant islands seem to charge premium rates.

Mooring fees below are charged by the night, and catamarans can expect to pay a surcharge for the extra width that they take up on the pontoon. The bigger, renovated marinas have excellent information online, but the table below gives a good sample of 2019 rates:

PRE-BOOKING A BERTH IN ITALY

The majority of Italian marinas have an online presence and it’s usually possible to book or request a quote online before you arrive, but they are almost all independently operated, and there isn’t currently one single place to go to get berths booked. Marina Reservation offer berth booking in Italy, via their extranet panel, so booking berths should be relatively straight-forward. 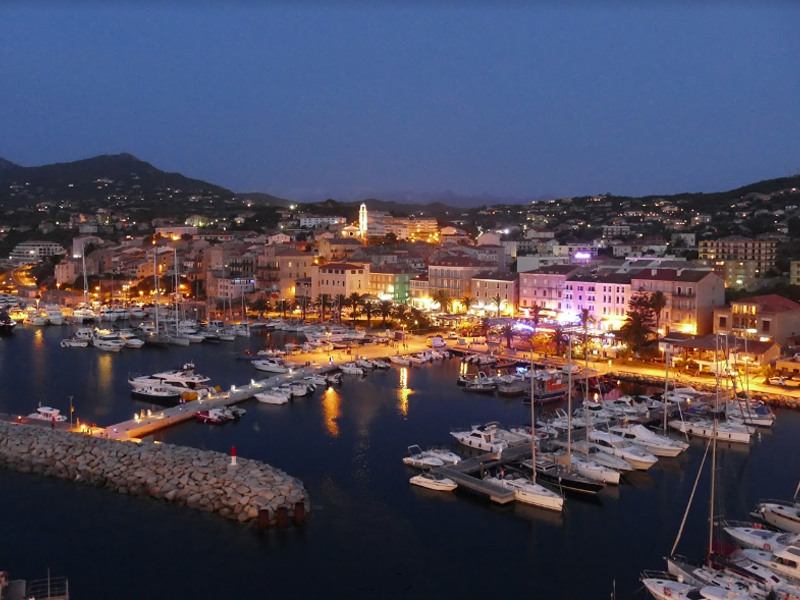 In France, yacht berthing or mooring fees range from €36 per night for a smaller yacht in low season in a municipal marina, to €500 per night for a larger yacht in high season in a high-end desirable marina. Catamarans can expect to be charged an additional 50-75% on top of that, too, and don’t even think about berthing in Monaco for the F1 weekend.

The set-up of marinas in France is markedly different to the rest of Europe, as the coastline is controlled by local regional councils, so, whilst there are huge private marina developments with five-star services, in most towns you will also be able to find a municipal marina, probably in not quite as glamourous a location, but for much more reasonable overnight fees.

Obviously the experience is slightly different, but it does make sailing more accessible and means that, for example, you can sail to Cannes and berth there for under €40. There seems to be no upper limit on how much you can expect to pay for the biggest boats in the best and best-located marinas, and F1 week in Monaco will set you back €1,500 a night, but you have to stay there for the full week, so you’re looking at €10,500 for 7 days.

We’ve gathered prices in the table below as minimum mooring fees per night. If mooring fees are an issue, it is worth shopping around and researching which marina to head to – many of the towns on the French Riviera have as many as six to eight different marinas, all charging their own prices. These are 2019 rates:

PRE-BOOKING A BERTH IN FRANCE

Similar to Italy, you can find most French marinas online, and the majority will allow you to send bookings or enquiries to the harbourmaster. There isn’t an over-arching one-stop-shop for berths in France (yet), so it’s worth contacting the marinas direct by email or telephone once you know where you would like to go. 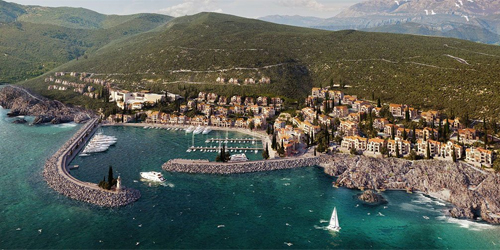 In Montenegro, yacht berthing or mooring fees range from €28 per night for a smaller yacht in low season, to €116 per night for a larger yacht in high season. Catamarans can expect to be charged an additional 50-75% on top of that, too.

Montenegro is the new kid on the block as far as sailing goes. It only really started to take sail-tourism seriously within the last decade – but it really is taking it seriously: there are already four multi-billion-euro marina developments in construction (and more planned) to maximise the outstanding natural beauty of the area, and to build upon the increasing adventurousness of people who have now sailed in Croatia for a few years now.<.p>

To entice super-yachts, they have the world’s longest marina berth – capable of taking a yacht over 250m in length – and one of their marinas has a whole brand new village, town centre, six star hotels and even a golf course. At the moment, the marinas are more modern than those in Croatia, but priced cheaper to try and get people to try them out, on the basis that once you’ve sailed in Kotor bay, you won’t want to sail anywhere else.

The table below shows 2019 overnight rates at some of our favourite marinas in the country, including the mega-marinas of Porto Montenegro and Lustica bay. Catamarans can expect to pay a surcharge of 50-75% on top of this:

PRE-BOOKING A BERTH IN MONTENEGRO

There is no sole owner of all these marinas, so there is no single place to go to book yourself in. For the bigger, newer developments, you can usually book online, but the smaller, older marinas like Herceg Novi, Budva and Bar still largely rely on telephone calls to make a reservation, if you can make reservations at all.