Why charter a Catamaran?

Last week we communicated some interesting news with our media partners - that tourist yacht charter operators in Croatia stocked up their fleets with more new Catamarans than new yachts. 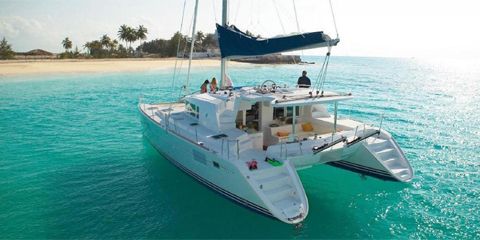 On its own, there’s still a 80:20 split of yachts to Cats, but the Catamaran is on the up and we’re seeing that eroded year by year and it could be that in five years’ time there will be more Cats available to charter than yachts!

Sounds unbelievable?  Think that yachts are irreplaceable?  They probably said the same about Viking longboats and Medieval Brigs in their time…?!  But why are more and more people chartering Catamarans, and, if you’re used to a yacht, what difference does it make to your sailing experience?

Obviously, the most important thing that a Catamaran offers is more space.  With two hulls, and all that space in-between, you can get a living space that is two or three times bigger than in a mono-hull yacht.  The Catamaran designers work real magic to transform the small and pokey cockpit area of a yacht into a majestic area for sitting and socialising, and by lifting the galley area from down below to the same level as the rest of the deck, they make the space feel even larger and more exuberant.

As Cats were originally designed to be helmed by a hired skipper, the steering wheel is a little out of the way, and a tier higher up (on top of the galley area, traditionally).  This means that the cockpit area can be a little less sociable than when you’re on a yacht, but mainly in the sense that you’re not forced to all sit in the same space for hours on end.  Sitting up top also means that you’re about seven meters above the water, so you get a good viewpoint for the bigger picture, but it’s a bit trickier at close quarters.

And under motor?  Well, they are ridiculously easy to handle.  You won’t need bow thrusters on this one - as each hull has an engine, you can manoeuvre the boat any which way you like, including turning the boat on the spot.  The intuitive controls make mooring a Cat pretty much as easy as it looks, and, with two hulls, the Cat is a lot less prone to being pushed around by the wind, which also takes some of the complexity of starting and stopping.

Personally, I chartered a Cat last year and will be chartering another one this year (through PlainSailing.com, of course!) – have sampled the luxury and space of a week on a Cat (at prices that are comparable per person, if you fill the cabins), I have no inclination to go back to sailing a yacht any time soon!